I've been experimenting with different forms of protected headers.

I tried modifying the Multilayer PGP/MIME Message with Protected Headers and Legacy Display Part , which has this structure:

The "normal" variant comes directly from draft -02, following the recommendations there:

The "inline" variant where the original body (part G above) has an additional header of Content-Disposition: inline:

(i'm experimenting with this "inline" variant to try see whether it is an improvement for other systems, see the screenshots project).

However, the "inline" variant actually doesn't render part G at all. Here are the two screenshots: 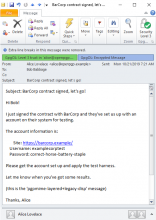 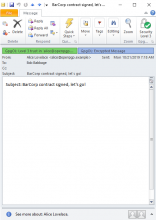 I'm not sure what it is about the addition of this inner header which makes Outlook appear to swallow the internal part.

Mentioned Here
T4796: GpgOL should hide "legacy display" parts when it encounters them

I've just tested this with GpgOL 2.4.6~beta3 as well, and while the i see the same issue :( (though the legacy display part is not shown, thanks to your fix of T4796). 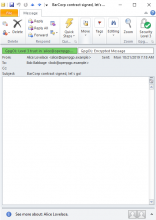 I remember that I tested inline content-disposition handling in Outlook without GpgOL and try to do the same handling as Outlook would handle them. But then at the very least It should be shown as an attachment and not hidden.