Some messages that are encrypted are not recognized as encrypted by GpgOL and users are not able to use GPGOL to decrypt them.
The messages in question are:
Content-type: multipart/mixed;
Content-Type: application/pgp-encrypted 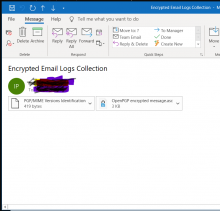 I can send mail raw message or headers for analysis in private conversation.

Hi,
could you please change the edit policy back to all users so that I can change the status of this task?

thanks for the report and the details. It is very clear what happens here:

is the underlying Problem. The mail is not a top level crypto Mail but instead multipart/mixed.

Where instead it should only be:

My suspicion is that some Software modifies your message in transit. For example to add an Image "Scanned by $Virus Software" to the mail. That breaks the MIME Structure and to GpgOL it no longer looks like an encrypted mail, but rather as a Mail that has an encrypted mail as an attachment and some other attachment.

A more complex MIME Parser for GpgOL that could handle this is something we would like to have but even Outlook itself does not support such a case in its built-in encryption support. And it is quite difficult to decide what to show the user in such a case. In your case the additional attachment could probably be ignored, but that might not be the case for other users and other attachments.

Thanks,
I edited the task and now you can edit it too.

I must add context to this story:
we haxe a,b,...y,z accounts. So far they were hosted on O365 exchange.
Couple of these accounts have been migrated to on-prem exchange last week. Only the accounts on-prem cannot read encrypted emails from accounts in cloud o365.
they can decrypt mails from other migrated accounts.
oh - I checked headers of archive mails - before it was always :
multipart/mixed
multipart/encrypted;
application/pgp-encrypted
and GpgOL was handling well.
Now I see only :
multipart/mixed
in header.

Dear gnupg developers.
I have contacted the Microsoft to get their analysis as well.
A Case #:20812681 has been registered. Where Microsoft stated that third party developers of plugins like GpgOL have their channels and should contact Microsoft directly in cases like this. Further analysis has been denied to me.

It is sad to see the gpg email encryption, ( probably the most secure way to exchange messages endpoint to endpoint there is to date ) to go slowly out of business because it is simply not supported by giants.
Best regards,
Iwona

I'm not sure what to do with the issue. For further analysis we would need to figure out what third party software breaks the MIME structure of the mail. That is more something for a support contract and not for the general issue tracker. This issue is very specific to your setup and so I'm not surprised that Microsoft says it can't help.