I hope it's fine to open this bug here even if 'GPG' command is indeed from GnuPG 2.2.28 that is packaged with Gpg4win 3.1.16.
In next comment I'll enclose a bitmap showing error message in Italian but lacking 'è' Italian accented letter.
Anyway, the correct expected error message in Italian should have been 'l'opzione "--ver" è ambigua' (unquoted)

That pretty much looks like the other errors you have with Unicode characters - which we can't replicate.

Ok, but the problem is that by default CMD command windows do not use any Unicode set of characters, and their default font is 'Raster characters' and the typical display of characters inside these windows, at least for Italian people because this was the default since MS-DOS age, is to only consider using MS-DOS ASCII codepage 850, not Unicode.
And this is also why before showing the error message I ran the command mode.
Anyway because of the 2 characters getting displayed instead of single expected 'è' (whose character code is 0x82) I can also tell you that by using Charmap.exe again (just in case you may not know it allows display of any Unicode or Raster font characters and their hexadecimal codes) and so switching its default font from System (Unicode) to 8514oem (raster, corresponding to 8514oem.fon) I've been able to determine which should be the 2 wrong displayed characters hexadecimal codes : 'Ã' (0xC3), and '¨' (0xA8) but here obviously both characters cannot be represented correctly because this site is using 'Segoe UI' font, which is Unicode too.
So the only main way to check that I identified the correct characters will be if you (or someone else you know) with another Windows client run Charmap.exe switch font to 8514oem (raster) and check that displayed characters corresponding to 0xC3 and 0xA8 are the same that got displayed in the error message bitmap I provided (a part from probably being able to find where in Italian messages localization rather then in source code those 2 characters have been used incorrectly).
P.S. Because in a past similar bug about Italian localization I saw a comment from you about this kind of option, please just let me know in case you think I might possibly be able to help you to review involved 'GPG' Italian error message(s) for this bug.

But now that you also just pointed out a display of Unicode characters issue I can also tell you that I found another secondary effect but since it's not related to this bug report but will impact on T5626 I'll just add a new note there.

please note that always for same 'GPG' command I've found another instance of an error with wrong 0xC3 and 0xA8 characters displayed together instead of single 'è' (0x82) accented letter. This time however the error occurs while using 'GPG --verify' or 'GPG -v --verify', options which, quite for sure, are likely to be used much more frequently than 'GPG --ver' command for which I initially reported the missing 'è' Italian correctly accented character.
Among output strings displayed on screen for both, expected correct one with Italian accented 'è' letter would have been: 'ATTENZIONE: questa chiave non è certificata con una firma fidata!'

So, here's another screenshot bitmap documenting this too.
P.S. The message displayed is basically of the same kind of the example displayed on this page of GnuPG web site right after the sentence "If you instead see", and the main reason why I got that same kind of warning is because on my system I'm still studying & doing exercises to learn Gpg4win and so I still haven't created my own certificate yet. :-o :-s 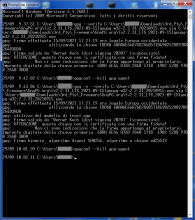