During setup of current Gpg4Win v3.1.16 on my Windows 7 (x64) SP1 Ultimate client (for Installer language I had choosen Italian - Italiano ), at nearly 20% of it, a non disruptive error 'PATH env variable too big' was displayed in a small dialog box (with Error title) only showing [ OK ] button.
After pressing [ OK ] installation seemed to proceed correctly and finished without displaying any more warnings or errors (and its setup wizard completed with an unchecked dialog box for README).

Because PATH system environment variable changes are typically expected after end of new application setups (in general new applications add their command folders at the beginning) after installation completed I decided to manually verify PATH via registry (so Path REG_SZ value into HKEY_LOCAL_MACHINE\SYSTEM\CurrentControlSet\Control\Session Manager\Environment) and noticed :

Because before setup I had checked current Gpg4win Compendium v3 https://gpg4win.org/doc/en/gpg4win-compendium.html and in particular starting from Chapter I section '6 Installing Gpg4win' https://gpg4win.org/doc/en/gpg4win-compendium_11.html I thought I had some idea of what I should have expected after end of Gpg4win installation, so after I also did verified that :

Since I wasn't really expecting any warnings (or errors) during setup I initially didn't get a screen shot bitmap of error itself so after I also checked that C:\Program Files (x86)\GnuPG and C:\Program Files (x86)\Gpg4win folders were created correctly I tried to investigate more only via 'GPG4win Forum for problems and help' https://wald.intevation.org/forum/forum.php?forum_id=21 but there I found almost no previous references of PATH environment variables related issues ('lite installer blows away PATH' tracked issue was from 2007 and anyway unrelated to issue I met even if at end it also mentioned '... it scared the crap out of me when all kinds of command-line tools were "not found".').
So after that, and expanding my investigation also among this site Advanced Search and then there I found : T3457, T3458 (both initially);
(today right before opening this bug) rKLEOPATRAc1a79f1d4cf7..., rG8872657b2a52..., rENIGe6d421fa2b65..., rMecedadb70083..., rM9db5d05376cc..., T5424 (so far);
I decided to remove Gpg4win and then reinstalled it to finally get a screen shot bitmap that now I need to know how to also ensure it can be reached from here (I'll check more about how to attach it somewhere...)

Apologies for my (newbie) comment on this bug reporting system. Since I have a screen shot bitmap better showing error I described, could anyone tell me how to attach to this bug ?

In the editor you find a cloud symbol with an arrow to upload a file. Use this and and the file id will be pasted at the cursos, like here

My apologies for further delay before also providing this screenshot bitmap of error found (because of initially not finding specific site info about best browser to use and not seeing 'cloud symbol' (many thanks werner :-D ) I obviously had to switch from IE11 to MSEdge and then also manually import proper cookies needed for this site :-(( ) 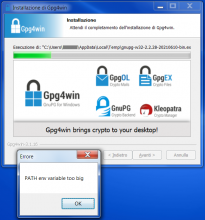 Woops, :-s I forgot to also add all these details from additional investigations I already did (obviously assuming it might be helpful ones for definitely fixing issue I reported (and my apologies in advance for whom might find lenght of all this really excessive, 8-) since I simply tried to comprehensively summarize results...)

Size of system %PATH% variable (for %PATH% I mean excluding 'PATH=' initial characters) in my own environment when I 1st ran 'gpg4win-3.1.16.exe' setup as an admin was initially 3086 characters(=bytes). After what happened I decided to manually review its contents and after determining it contained errors (=duplicate paths intended as unneeded repetitions of same path) I manually corrected them into registry, lowering its size to 2536 characters(=bytes).
But by doing this I was too fast and forgot to follow standard official way (so via Control Panel -> System -> Advanced settings -> [ Environment Variables ] ) and that resulted in unexpected restart of Desktop .
However after that I verified that only new Desktop (explorer) session inherited updated new %PATH%, which I also ensure it was automatically updated even more (after I manually removed another application owning first folder path found into %PATH% and then added back same app but with more updated version whose number is also into its folder path, once again at beginning of updated %PATH% contents).
Also, because explorer session I used when I ran 'gpg4win-3.1.16.exe' setup as an admin for the 2nd time (to finally take screenshot I already published here) is a 'separate' one, it didn't inherit any updated %PATH% contents and so I fully reproduced same initial situation (while I was wrongly a little expecting this not to happen).
Anyway, after doing all this, I also investigated some more about expectable maximum PATH size, and found these known references from MSFT :

Because of T3458 and other references to PATH I found in the past (see past references I added previously into this bug), could anyone please be so kind to confirm me if am I right to assume that under normal conditions (so with no PATH related errors like 'PATH env variable too big' I reported here) after proper end of 'gpg4win-3.1.16.exe' installation only following (unquoted) path string 'C:\Program Files (x86)\Gpg4win\bin;' would have been added at beginning of PATH system environment variable ?
Or if not, would new path rather have 'C:\Program Files (x86)\Gpg4win\bin;C:\Program Files (x86)\GnuPG\bin;' (always unquoted) prepended at beginning of PATH system environment variable ?
P.S. Please note that I'm only asking this to then try to properly manually set PATH system environment variable accordingly and then see if my (current) 2nd 'gpg4win-3.1.16.exe' installation can still work correctly as expected or not... ;-D

OK, while I'll be awaiting for anyone to possibly answer my last 'Sat, Sep 18, 6:29 PM' question that I decided to re-update today, just for sake of completeness I've also been able to check more inside registry but details will only go inside T5605 since only pertinent there ;-D

While I'm still waiting for anyone to possibly answer my last 'Sat, Sep 18, 6:29 PM' question I've also added there the explanation behind that question... :-)

BTW, there are known solutions to manage with PATH overgrowth.

On the issue, I think there are several possible solutions, better than current:

@grv87 OK, many thanks indeed for confirming all this.
About your 1st comment: that's just right why I asked about it. Regarding md5sum and pinentry both must be the reason why now they decided to also add 1st path into environment while in older version wasn't there. Main issue is that because of the quite generic 'PATH env variable too big' error so far we can only assume 2047 was indeed maximum size for %PATH% Gpg4win developers have been expecting so far, while after that change from March 2012 QFE fix a definitive fix to implement in setup and rest of Gpg4win involved code will just be to enhance that maximum allowed path size to 4095 characters (BTW also checking anyway for size of %PATH% already active before setup will continue with new %PATH% changes is probably best option too).
About your 2nd & 3rd comments: thanks for those useful references. Would probably be quicker to implement, but it's still again true that maximum size expected for %PATH% will still need to increment from (likely) 2047 to 4095, plus also what you said about something "for expert users only". And even then inside README.txt (that now corresponds to %ProgramFiles(x86)%\GnuPG\README.txt or %ProgramFiles(x86)%\Gpg4win\share\gpg4win\README.en.txt or %ProgramFiles(x86)%\Gpg4win\share\gpg4win\README.it.txt) there should be at least 1 note about suggested way to do things. Problem is that because of above (March 2012) MS KB article statements '... If an existing value contains more than 2047 characters, you cannot enter additional data. However, you can delete the characters that are displayed. ...' whenever %PATH% size is over that value (always true for me even after manual %PATH% downsizing I had to do) OS UI will be of no or very little help (and by very little I intend that to overcome that OS UI limitation expert users with Admin privileges will 1st need to manually modify Path value into Registry, let's say by adding at least 1 or 2 ";" really unneeded, then just use OS UI to modify %PATH% system variable by deleting those ";" unneeded (i.e. %ProgramFiles(x86)%\Gpg4win\bin;;%ProgramFiles(x86)%\GnuPG\bin;;) and then once removed confirm with OK twice, and voilà it's done).
(P.S. BTW I just checked that so it really works fine for all applications started after that change ;-D so this might probably be best known option to document inside that README.txt.
N.B. JFYI in the past I also tried to use SETX from command line, and so I discovered that it only has a 1024 maximum characters limit after which it will just truncate any expected change that is saved anyway into selected system variable).
Otherwise, another possible approach variation but unsure if needing more coding would be to create 2 new system variables (let's say Gpg4win and GnuPG) and then add both %Gpg4win%;%GnuPG%; in front of existing %PATH% while installing, but obviously still after enhancing maximum allowed PATH size to 4095.

@swimmerm, my 2nd comment offers some solutions for you and other users coming here with the same problem with their PATH. It should be done on user side. I don't offer to implement this in Gpg4Win installer.

Referencing one env var in another doesn't work reliably with all software. For instance, here is algorithm implemented in Windows Terminal. They specifically say that environment variables from registry are loaded in arbitrary order. And there are no forward declarations for env vars.

@grv87, thanks for clarification (and very interesting side thread reference you gave, indeed, also because it also gives you an idea of how system environment changes during OS startup). I precisely see your point and that's also why I said "create 2 new system variables".
I've not said this very explicitly before but for that I also meant to just create them during Gpg4win setup. When it is run, I assume we can also say that OS system environment is already in place and %PATH% should already be stable enough to consider that as a good starting point to add things. So once you can really do that (I mean add 2 new system variables), and then also ensure they're created correctly, then I can also assume that then starting to use them to update %PATH% system variable might be fine too.

Could anyone please be so kind to confirm me if when 'gpg4win-3.1.16.exe' setup completes without any error the new folders where Gpg4win and GnuPG commands can be found are prepended (so inserted at beginning) or appended (so added at the end) of already existing %PATH%) ?
I'm asking this to properly ensure that my new manually modified configuration %PATH% is indeed equivalent to an original configured one (and so far I've assumed that my manual changes were prepended %ProgramFiles(x86)%\Gpg4win\bin;%ProgramFiles(x86)%\GnuPG\bin;%PATH% probably because changes were faster to do).

Many thanks in advance.