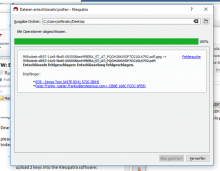 I think I know what the problem is. T4038 only works for "legacy algorithms" this means old ciphers where MDC was not the default are handled by this error. New algorithms like AES which should have MDC in all implementations were not affected by this because this is much rarer and points to a broken implementation / a real attack.

Do you know which implementation created the encrypted files?

Is it really not an option to re-encrypt the old files using the command line?

I accept it as something to be improved. At least the error should be better but I give this low prio as I currently don't think this affects many users.

@werner I've added you to the CC as ultimately you decided when to set the legacy_algo_no_mdc flag on which Kleopatra's special handling depends.

By the way. As I see the domain in the screenshot ;-) let me just say that there is commercial support for GnuPG (https://gnupg.com) available and through which we could much better and quicker help you to find a solution that works for you if this is a problem in your organisation.