Version 3.1.8 can not "Encrypt for others"
Closed, ResolvedPublic
Actions

When adding certificates to "Encrypt for others", version 3.1.8 displays red "x" mark at the left of the certificate name even though the certificate is selected from list of installed.
And pop up says as below.

"No matching certificates found. Click here to import a certificate." 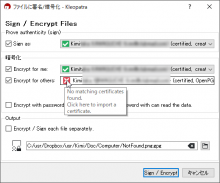 Thank you very much for the report. I can see this problem myself. It is strange because the code for that has not changed since 3.1.7 so it must be some sideeffect.

Our Testplan had a gap in the file encryption test in that it did not specify that the tests should include encrypt for others.

This issue probably requires a minor patch release again and gets highest priority.

I think in the future we will always release an official beta build before a release so that the community has a chance to find issue that are not part of our test plan before a release. :-(

The reason for this is the change to Kleopatra that the columns are configurable ( 4847fcc27afc8101752de82b0dd1f5fee027695d ). In the process we added additional columns like origin and to hide the "summary" column that the line edit for the recipients use we gave it an index number that was higher then our internal column count.

This had the side effect that the data model used in the recipients selection was no longer able to map keys to and from the summary column.

Thank you very much for your quick action!