Hi,
This is a topic from 2016/2017, but I need to bump it. As mentioned in the comments displaying inline images in encrypted emails should work properly from 3.0.0 beta 204 version of Gpg4win.
I do not know since which version GpgOL has stopped showing inline images, but this problem came up again in the form exactly the same as describe by Dr_IT years ago.
So, images inserted in the body of an email cannot be shown correctly. Instead the image block with "The linked image cannot be displayed. The file has been moved, renamed, or
deleted." appears. Both in sender and receiver email in Outlook.
It looks like GpgOL converts inline images into attachments during the encryption process, but I'm not sure if it is a bug or that was the intention.
Both me and receiver use Outlook 2013 (version 15.0.541.1000) with the newest version of Gpg4win (Version 4.0.2 released 2022-04-25).

I think it's worth noting that this is not restricted to encrypted e-mails but signed-only e-mails also.

Hello,
I'm having the same issue here, and as I've an image in the signature of my emails the signature is not visible at all when I sign the messages.
The image attached seems to be well included in the attachments and the image is readable.
Thanks,
isundil 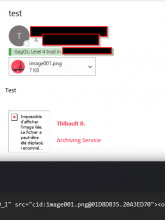