If I use gpgex to encrypt/decrypt a file with a german umlaut, there comes a GPA
Error "Invalied argument". After renaming the file the encrpyt/decrypt completes
without error. I did install GPG4win 2.2.1 on Windows 7 Professional 32 bit.
This error comes also if an umlaut is in the directory strukture included.

Here you can copy some ä ö ü ß

I can reproduce this on my test system, if I just create a folder with the name
"földer" Kleopatra / gpg2 /gpgtar don't show an error they just fail silently
and create an empty archive. I guess there is some utf8 to system locale
conversion missing.

As kleopatra offers me the option to "Delete unencrypted files" after encryption
I am marking this as critical as it can lead to data loss.

At least there should be an error so that the removal after the encryption is
not done!

accidentally removed the original reporter from the nosy. Sorry (readded)

gpgtar correctly returns an exit code != 0 in case an error happens. This exit
code is eaten by kleopatra so the problem that success is reported on error is
on kleos side.

But gpgtar has the encoding problems. From the kleopatra side it looks ok file
names are handed over to gpgtar in local 8 bit encoding and not in utf-8. And
even directly on the command line it fails.

The problem is that internally gpgtar treats argument file names as UTF-8 and
even converts the return value from syscalls like findfirstfile to UTF-8 before
opening them. The open uses the utf8 encoded filename and fails as the file
system usually does not use utf8 file names on Windows.

A workaround would be to convert to ACP (CP_ACP (afaik ACP is correct for
filenames)) instead of converting to UTF-8. But this will not work for ?
but as gpgex and kleopatra already fail earlier on "Non 8 bit representable
characters" this should be acceptable for now.

So two fixes need to be done:

I hope to get this done tomorrow evening.

Thank you for working on this problem. I also use GPA 0.9.4 for Windows as gpg
frontend. Would be great if the fix will make the file encryption working with
umlaut also in GPA and kleopatra.

I've tested this with kleopatra and it works now to encrypt a folder which has
special characters in the local code page in filenames. And tested it on the
command line.

This should improve the status quo a lot as full utf16 file names are rarer and
gpgtar / gpg4win is not the only tool which has problems with utf16 filenames ;-)

I did not go for proper unicode support because this would mean:

But we would have to discuss if we should do 2. also on non-Windows systems.
Currently gpgtar expects local 8 bit encoding there. So tools using gpgtar would
have to convert their arguments differently for Windows. 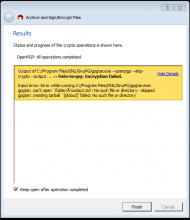 The error is now handled by Kleopatra:

I'm a bit scared of regressions, though as the Input handling is so
"generalized" in kleo that I don't know if I now broke cases where input errors
are expected :-/

Attached is a screenshot how it looks now with a broken gpgtar version. And
files are no longer deleted as the operation is no longer thought to be successful.

I did install gpg4win 2.2.3 which does include the fix for Umlaut. I prefer to
use GPA as frontend for encryption and decryption. For decryption, I did link
.gpg to be always opened with GPA. Unfortunatly if the File or Path to the .gpg
has an Umlaut included the GPA GUI crashes. Only if I use the open button from
GPA the file can be added to the GPA frontend and decrypted. For non-umlaut
files the link to open .gpg works fine. Do you also work on GPA bugs or do I
have to report this under the GPA category?
Thank you & regards,

I've changed the category to gpa, adjusted the topic and version to 2.2.3
As you've already described the problem together with GPA here I think this is
better then opening a new bug.

I'll also no longer call this critical as the original data loss problem
(Encrypting files where one has an umlaut -> kleo thinks its a success and
deletes the original) Should be resolved.

The fix in GPA should be fairly easy. Some conversion from native to utf-8 on
input and utf-8 to native on output. So I'm taking this issue.

Werner: Could you please take a look at the patch for gpgtar. I will probably
propose something quite similar for GPA. Not real unicode support but at least
for 8 bit filenames.

It probably would have been better to create two issues:
a) Dataloss with Kleo in 2.2.2 (fixed now)
b) crash with gpa

I've opened T2185 for the GPA Problem so i can change the topic here and we
can cleanly close this issue when the gpgtar fix is applied upstream.

We might also want to create a new fix for UTF-16 support in gpgtar once this is
closed. But the attached patch would improve the current situation already a lot.

Btw. this was patched in Gpg4win for over a year now. So I expect we would have
heard if this caused regressions.

Please try to reproduce. Here you can get some umlauts ö ä ü ß.

Also if you have associated .gpg extension to be opened with GPA in
windows. The GUI does not crash instead the file is not added to the
open > list and cannot be decrypted - compared to a file without umlaut's.
Please find screenshots attached.
The solution is to remove the umlaut. However, this is not a great usage
acceptance especially for German gpg4win users.

Btw. this was patched in Gpg4win for over a year now. So I expect we would have
heard if this caused regressions.